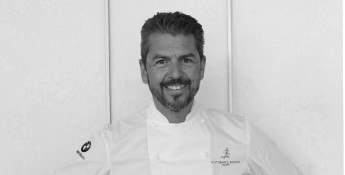 Andrea Berton was born in Friuli Venezia Giulia in 1970. His adventure started in Milano in Gualtiero Marchesi’s cuisine in Via Bonvesin de la Riva, where he stayed for 8 years. His training continues in the best restaurants in the world: Mossiman’s in London, Enoteca Pinchiorri in Florence and at Louis XV di Montecarlo under Alain Ducasse, where he stayed for four years.

From 1997 to 2001 he worked as Chef at the Taverna di Colloredo di Monte Albano, gaining his first Michelin star. After this important achievement, he went back to Marchesi as Executive Chef. In 2005 he started his collaboration with the restaurant Trussardi alla Scala where he won several awards, obtaining the first Michelin star in 2008 and the second one in 2009, Tre Forchette Award from Gambero Rosso in 2010 and Tre Cappelli Award in Espresso guide in 2011. In 2012 he started with consulting in positioning, ideation and the development of new high quality dining projects. With a group of partners he opened in 2012 Pisacco Restaurant and Bar and in 2013 DRY Milano Cocktail&Pizza.

He goes back to his cuisine with the opening of Ristorante Berton where he presents “modern dishes”, giving value to common ingredients and revealing some unknown ones.

In March 2015 Berton was nominated EXPO Ambassador, in August 2016 Andrea Berton started a collaboration with Il Sereno, a luxury resort on Lake Como, with his restaurant “Berton Al Lago”, which gained a Michelin star in November 2017.

In October 2018 the Chef received the Pommery Award “dish of the year” from Guida Ristoranti d’Italia 2019 by Espresso for his unique Lasagna with pigeon and he won Quattro Cappelli also from Espresso Guide.

Select the day that you prefer

The value of Italy’s great cuisine for the development of high-quality tourism. The Gualtiero Marchesi Foundation at TTG 2019